Berry Burst Max is one of those NetEnt releases that makes players stare at the screen, amazed at the stunning graphics and special effects. Its RTP above 96% is only the first characteristic that drives players’ attention to the game. All other features and bonuses should be duly collected and described on a complete slot review.

Adapted from the original game, the Max version has only some subtle changes. Before heading to learning how to play the game, it is essential to know the combinations and features within the game. Despite avoiding surprises, players can know what they can expect, even when they play for real money without much success in the first spins.

All symbols on the slot game are either berries, fruits, or shining little deck suits. As a matter of fact, the provider deserves to be congratulated for transforming the low-paying symbols into beautifully designed pieces. There are lots of video slot games out there that create a poor design to the 3 or 4 lowest paying symbols, usually related to deck cards. 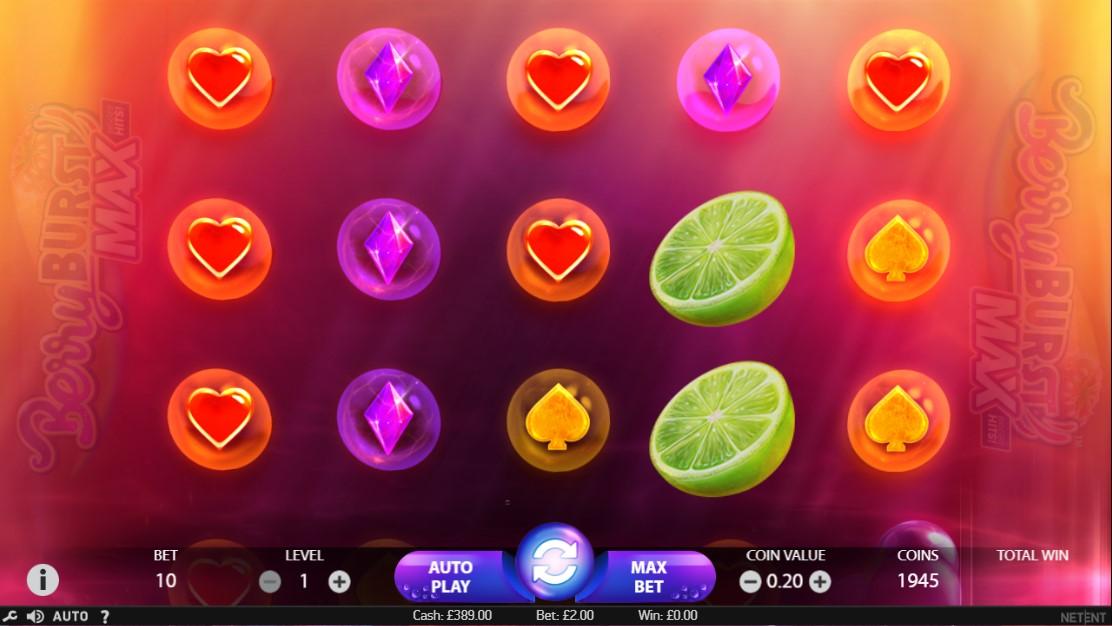 While all fruits pay better than the suits, the raspberry is the best possible item to combine in clusters of at least 5 and up to 15 on 5×3 reels. Now, although that is a combination with more symbols than the regular slot games, “cluster” is the keyword. That means those combinations can be carried out in horizontal or vertical positions, as that does not matter.

Therefore, a bunch of raspberries on the left side, even if covering only the two first reels, is enough to grant players some winnings. That system called Custer Plays can be taken another step further when a Wild appears next to a cluster. It basically merges with them as if it were that exact same symbol.

Although that is not a bonus, it helps players collect many more winnings, as the Wild can replace, basically, any other symbol in the game. The only case when that does not happen is when the whole screen is covered by Wild Symbols, and they have nothing to substitute. As players are about to understand, the appearance of a Wild goes beyond completing a line.

Fortunately for players who always choose slot machine games looking for free spins, that is a feature found on Berry Burst Max by NetEnt. Instead of receiving a bunch of those for combining a Scatter, players can count on the Wild feature to generate an instant bonus round.

In other words, whenever a Wild symbol appears, it automatically becomes an expanding Wild symbol. It covers the entire reel, matching all symbols on its sides, hopefully, to form another combination. Before leaving, it triggers one single free spin, which may result in another Wild. If that occurs, all Wilds stain in place, and another free spin is awarded.

Therefore, the more Wild symbols, the more free spins are awarded, and the better the winnings resulting from the substituted clusters. Considering that it is a high volatility game, those moments of luck are essential to generate high winnings and continue playing.

Players can choose to play the demo or the real version on slot sites. They both count on the same RTP, rules, and bonuses, but the demo version is not capable of resulting in real winnings. Instead, the free play is useful to have fun for an unlimited amount of time and to test the Berry Burst Max game after reading the review. 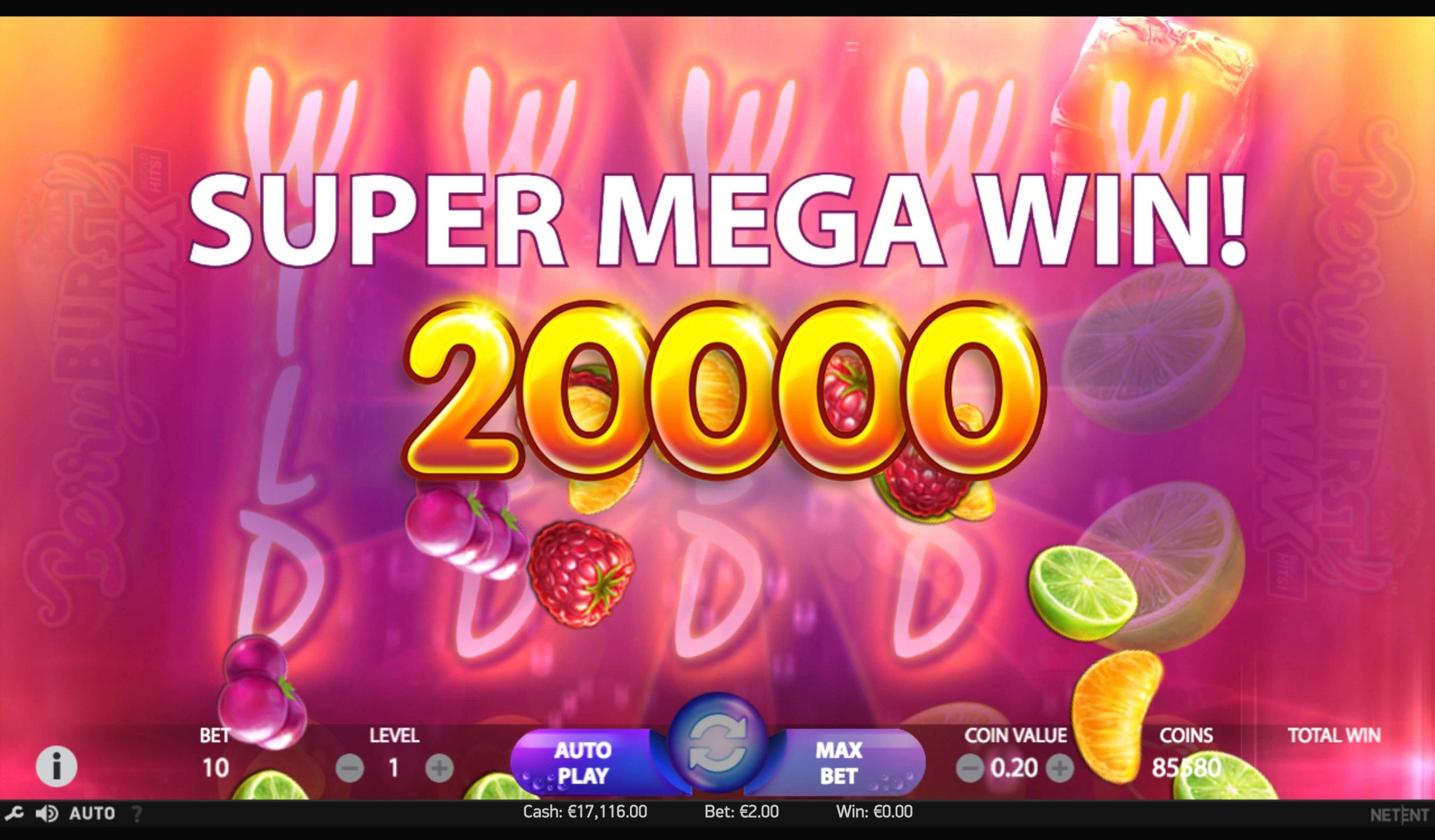 An alternative is to activate an existing no deposit bonus that awards either free spins or bonus credits for bets on the slot. Different from playing as a demonstration, all winnings are actually added to the funds as bonus credits. In order to withdraw anything, it is necessary to complete wagering requirements that are common to any bonus.

Choosing the playing method, players only have to set their initial bet, which can start at a few cents and raise up to 100 coins at once. That is all players need to set before giving it a start. That and making sure to be playing on a reliable and the best online casino possible, of course.

All winnings are instantly calculated, and players can choose to keep AutoPlay on to avoid pressing the spin button every time. Hopefully, the activation of the bonus game with Wild free spins will be triggered soon.

The best strategy to play Berry Burst Max is to keep an eye on the remaining funds and the bet amount, especially those who like to turn AutoPlay on. That way, players will not risk going too low on funds in a day without much luck. Other than that, there is no way to guarantee a win or achieving at least one Wild symbol.

The top-notch online casino sites offer games such as this slot and feature them among their top games. Despite looking gorgeous during the whole gameplay, the surprising feature of a free spin awarded by the Wild symbol tends to keep players active. Accessible through mobile devices or computers, the game does not count on a Scatter or any other special symbols.

Besides, it does not combine symbols like traditional slots, forming clusters instead of payment lines. That is why that characteristic was not mentioned throughout the entire review. The best part about the Cluster Pay system is that any Wild, besides awarding a free spin, can result in a much better combination when falling on the right place.

Finally, the Berry Burst Max slot game is rather simple and is, to some extent, quite similar to the also popular Starburst game by the same provider. Therefore, fans of one game will most probably like the other.