Da Vinci Diamonds is a traditional, in the full meaning of this word, video slot game, released by International Gaming Technologies WagerWorks back in April, 2015. Same as some other slots developed by this provider, its history dates back to the era of land-based casinos and one-armed bandits; these were the times this slot has first seen the daylight.

Since the beginning of the 1980s and ending with today, this slot is righteously titled as being the most played slot machine in the history of this industry. One of the reasons for such a long-standing presence on the market and in the portfolio of platforms claiming the status of the best online casino in the industry is the theme.

The Renaissance period is undoubtedly one of the most beautiful moments of human history. Depending on the country, it has lasted in Europe since the 14th century and ending with 17th in England. This period has granted us countless masterpieces and treasures, as well as personalities. Leonardo DaVinci is a personality known to virtually any human in the world. Filled with elegance, splendor and beauty, his masterpieces, as well as engineering inventions, entered into the historical testimony of humankind. Indeed, this is an excellent theme to choose.

As previously mentioned, this slot has been first released long ago for land-based casinos. When the online release was prepared, it was decided to leave the initial design and thus maintain the continuity of the entire process. If compared with modern slots, developed by MicroGaming, NetEntetainment, etc., IGT slots would somehow vanish. Nonetheless, the pleasant and creative color scheme, friendly user interface and magnificent works of Leonardo used for symbols’ representation would compensate the lack of high-techie 3D animations and super-bands hired to register the game’s soundtrack. The game features a black playground with 5 reels/20 pay lines.

The game allows setting a max of 1 coin per line, coins being valued from 1 to 100 US dollars. The jackpot available is 5 000 coins per spin/free spin – an impressive amount! Yet it deems in the light of max available payout – 25 000 coins, that is as much as 250 000 US dollars – a quarter of a million.

The return to player index (hereinafter, RTP) is set at 94.94%, which is a fairly low figure easily beaten by provider’s competitors. The slot is labelled to have medium to high variance, which implies that the game is prone to bring surprises – definitely a plus of slots’ enthusiasts keen on interesting and dynamic scenarios.

The game is equipped with free spins, tumbling reels and other interesting features, as well as bonus game rounds and Wilds and Scatters with interesting behavior. Overall, from this perspective Da Vinci Diamonds hardly has any rivals – no wonder that there are many other games exploring the same theme, such as Black Diamond, Diamonds, Queen, Wild Wild Gems and many others, still none of them was able to reach such a popularity.

The game mechanics was implemented with the help of HTML5 technology, hence making it available for play from any device, desktop or mobile, regardless of the operating system in use. Android, Windows, MacOS, iOS, etc. users would enjoy seamless and streamlined gaming experience. Multiple slot review posts available on the net quote the aforementioned fact as a big plus of this game.

Put on top the proven simplicity of it and the reason for the game’s popularity becomes clear. Players like such high payouts, such dynamic gameplay guarantees a firm status quo among modern slot games.

Da Vinci Diamonds is a classic slot when it comes to the way of forming winning combos on the pay lines. However, when it comes to symbols, the game would differ quite a lot from other traditional slot machines. Players will not see standard cards values, preference for low paid values being given to gemstones of different colors. The high paid values are represented by famous Da Vinci paintings. 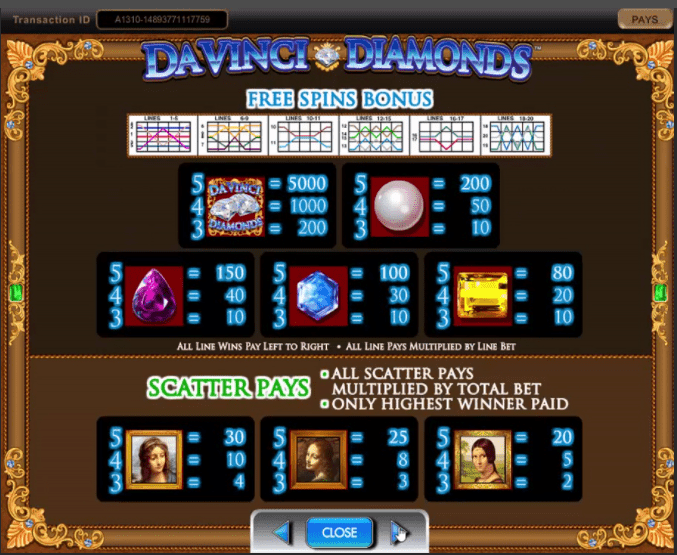 High-paid symbols used in the game are represented by famous Da Vinci paintings:

Low-paid symbols used in the game offer fairly modest payouts, and include:

Special symbols used in the game include:

The comprehensive pay table of the symbols can be found directly in the game, presented in a comfortable and friendly manner.

The maximum possible number of free spins a player could get is incredible 300! The bad news is that players’ feedback clearly shows it happens extremely rarely, quoting a medium range of up to 50 – 70 free spins gathered.

IGT was probably the first dev team to bring in the Tumbling Reels’ concept. Today it was used by many slot providers, labelled as Avalanche Reels or Cascading Reels, yet the credits for this invention still goes to this agency.

Da Vinci Diamonds is a classic slot, hence is very easy to play as traditional slots are rarely using complicated mechanics and sophisticated bonus and playing schemes. Classic slots are designed to bring entertainment and cash, and multiple online casino sites offer such a possibility. 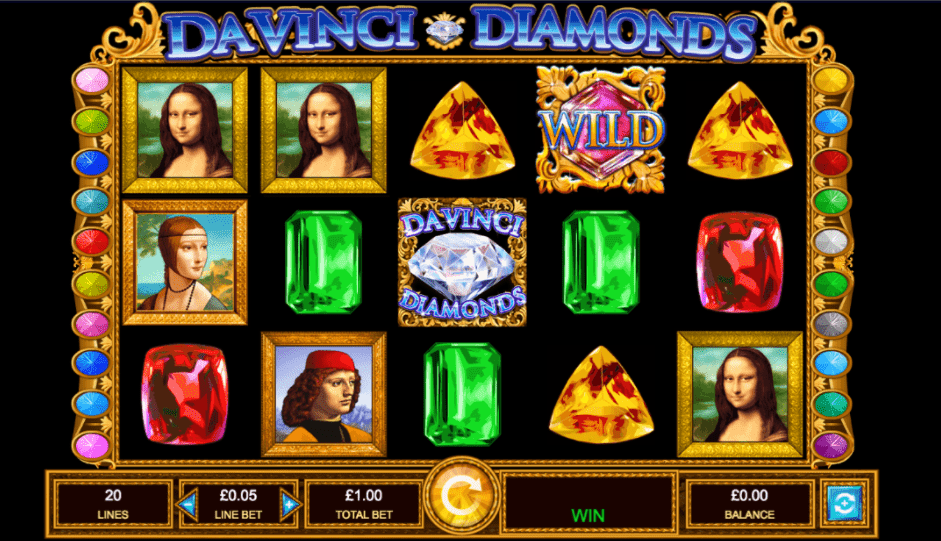 Despite the video slot being very simple, it is still recommended to read the FAQ and test the game for free play, as a demo. Given the overwhelming presence of the game on numerous slot sites, it is easy to test the game for free, with no deposit and even registration required. Some of them even include this game into their welcome and bonus offer, thus giving players a chance to win money without actually betting anything.

As soon as all peculiarities are clear, players may choose an online gambling establishment to play the slot for real money. Afterwards, proceed with adjusting coin and bet sizes and spin. Auto play option is available with a predefined set of options – 10, 20, 30, 40, and 50 auto spins.

Just as any other slot machine, Da Vinci Diamonds has a lot to offer, yet could offer even more. Following a research across players’ feedbacks, the points below came to evidence as slot’s strong and weak sides: