Gonzo’s Quest virtual video slot machine is a famous slot game available to players for more than 10 years having been released in 2011 by NetEnt. In fact, this slot has been the first bestseller of Net Entertainment that made this famous game development agency extremely popular exceeding the popularity of games offered by other big names in the industry, such as MicroGaming.

The slot provides a 5-reel 3-rowed screen with 20 pay-lines that can be played from any device. Be it a laptop or desktop computer, a smartphone, tablet, or any other devices running on Windows, MacOS, Android or iOS – the slot is fully mobile friendly. The return to player indexes (hereinafter RTP) varies between a rather generous 95% and 95.97% depending on the casino. It also features rich bonus schemes, with a max winning threshold of 125 000 US dollars. With a minimum bet of 0.25 and a maximum bet of 50 US dollars the slot is righteously regarded as prolific and lucrative.

It uses the Avalanche Reels feature – a concept owned and branded by NetEnt, a pretty distinguishable feature of this particular slot that altered the traditional reel system.

The slot uses in-game currency known as coins and valued between 0.01 and 0.50 US dollars each depending on the value. The auto-play and the game history features are two more things distinguishing the game from other slots. The first allows conditioning up to 1 000 automatic spins, while the second will stop the auto-play in case the player starts losing money. These functions are not available in free play games. Multiple online slot reviews are available to showcase various players’ gaming experiences. Summing up the reviews, looks like people love the game in all its aspects.

As already mentioned above, the Gonzo’s Quest was the first video slot game to replace the traditional reel with the NetEnt branded Avalanche feature in 2011. Symbols are cascading downwards simulating the picture of falling rocks. When a winning combination pops up, the symbols are crumbled and filled with even more symbols. 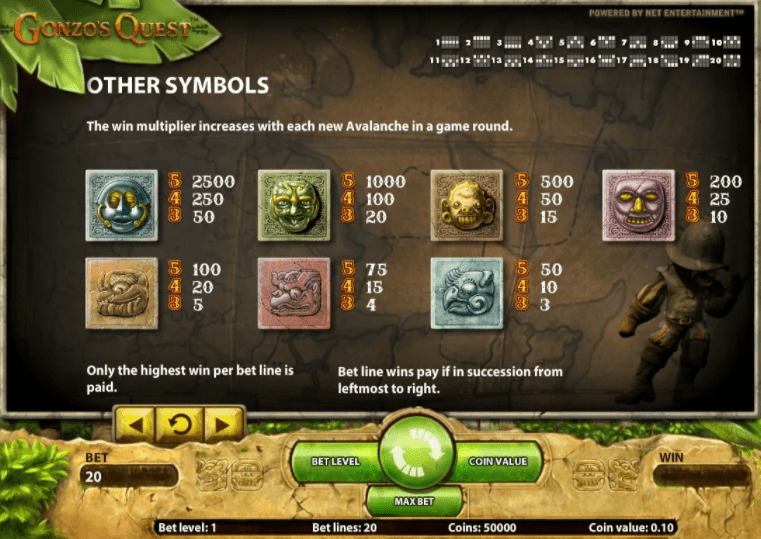 With that approach, the player has the chance to win real money in every spin/round. One more important symbol is the free fall scatter symbol as it allows entering the Free Falls feature. Players become entitled to 10 free spins/rounds and the multiplier meter changes every time. Three scatters indicate the availability of 10 more free spins.

The slot is rich in free spins and bonuses both thanks to both the famous Avalanche Multipliers’ feature and the in-game player-wise prolific bonus system. Being a unique feature of the Gonzo’s Quest slot game, the Avalanche replaces the winning symbols by new ones to aid to streak wins featuring up to 15x multipliers on different stages – a new approach opposed to the traditional one with spinning round by round the reels. This approach definitely provided a considerable input in the game’s popularity as it steers the player’s interests and raises the bets.

The Avalanche Multiplier is positioned in the right top part of the screen. It gets into action every time a winning combination is in play. While the first win is subject to 1x multiplication, each subsequent one increases this figure by 1x up to a maximum of 5x while in the base rounds, and up to 15x in bonus rounds (known as Free Falls). The latest applies multipliers to every lost spin; the total can later be used in case of a winning combination. Players who prefer betting real money know that chances for a big win are very high. The Avalanche Multipliers’ features a system as follows:

Every casino claiming the status of the best online casino surely has Gonzo’s Quest slot on board in both forms of free play and real money betting. Same, every casino offers additional bonus features and free spins/rounds on various occasions. Overall, this slot game leaves very positive impressions and definitely captivates the attention thanks to this peculiar bonus system. Some casinos offer free play opportunities, such as free spins and even no deposit bonuses.

The plot presents a conquistador named Gonzo who has stolen the map that will show the path to treasure. The game carries the name of a real 16th century character – Gonzalo Pizarro. The slot is famous for its qualitative 3D animation and graphics, as well as the musical background. NetEnt has invested a lot of attention into this project having all sides covered. The game features seven systematized and two outstanding symbols: 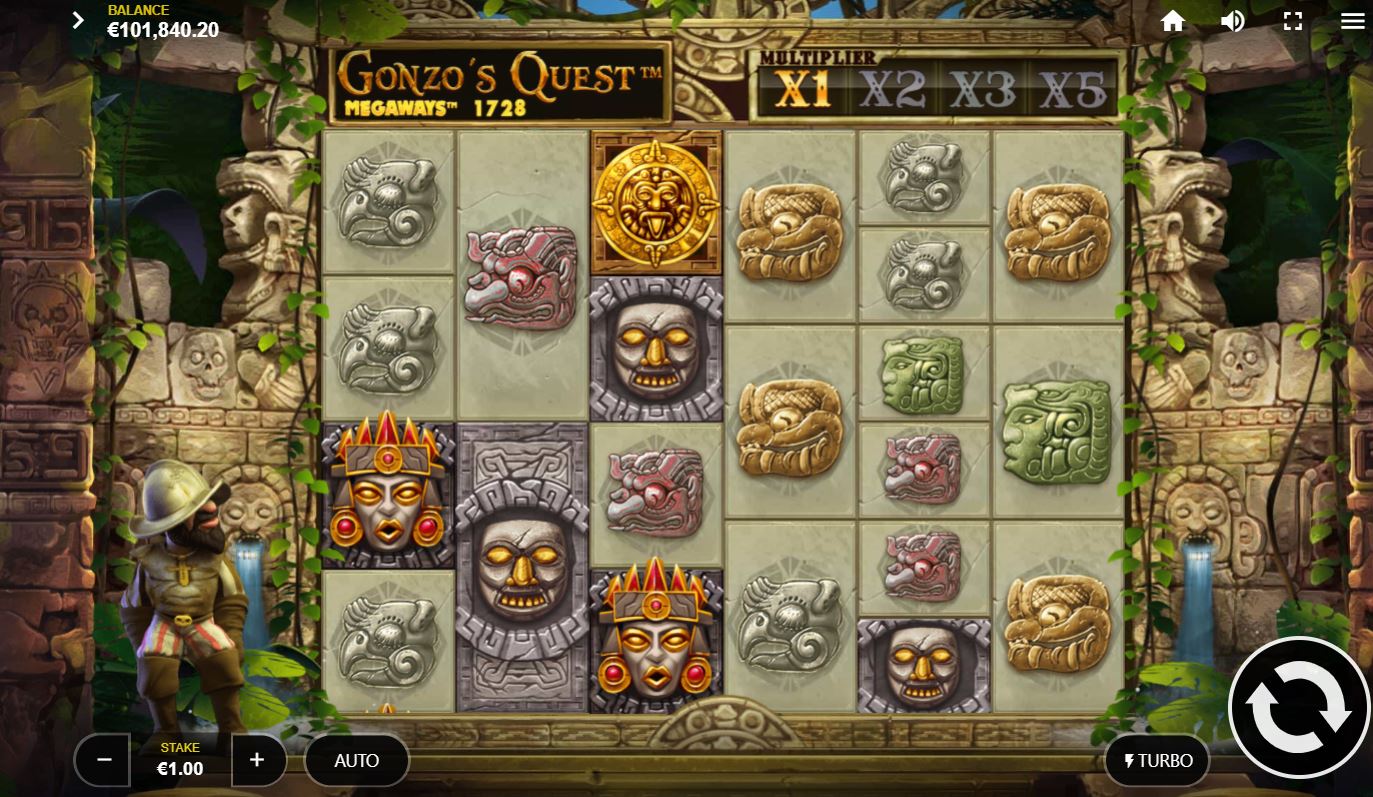 As soon as a winning combination forms a line, composite symbols explode and get replaced by new ones to offer the next avalanche. This is a unique feature of this game – the Avalanche Multipliers – that transforms the entire gaming process in a bonus generation process. Free spins/bonus rounds are generated by the Free Fall feature – these options will be presented in broad below.

Regardless of the selected online gambling establishment, chances are high that Gonzo’s Quest will be present on the platform as leading online casino sites and dedicated slot sites in particular cannot simply bypass one of the most successful slot games ever. The success of this slot goes beyond the Net Entertainment games rather tending to general industry success. With the status of modern classics, it has refined the slot industry standards inspiring for changes and innovations. Heavily improved video slot graphics, an innovative benefits incentivization system (the Avalanche Multipliers), high payback and general comfort while playing the game fuel its popularity. The bonus system envisages that whenever the player finds the 3 Free Fall signs, he/she can run one more bonus game round/spin. Since its release in 2010, the game’s popularity continuously increases among both lovers of big bets and wins and people who just do it for fun.

While getting acquainted with the game and before making real money bets, it is advisable to read the detailed and widely available how to play instructions as well as Gonzo’s Quest free demo mode available on most sites. It is hard to speak of a strategy since the game is based on luck. Yet the best approach would be to play the game long enough to generate the Free Falls feature. It generates a much higher payout and with an RTP rating of almost 96% offers exclusive chances to win an impressive payout. In a nutshell, the features that made this slot game successful are: