Grand Monarch is a game title by IGT (also known as WagerWorks) that is claimed to be the most popular release of this game development agency.

The history of IGT dates back to the era of land-based casinos and one-armed bandits, hence the online casino sites slot market was entered from the perspective of an agency specialized in classic, traditional slots, with limited mobile support and often obsolete graphics.

This specific slot game is an exception from the rule. The butterflies and flowers theme were very positively received by the audience to the extent that it generated several clones. Given the video slot game name, one might think that the gameplay has a royal topic in mind, still the theme is deeply rooted in nature, the main hero being the Grand Monarch butterfly.

This slot machine is nicely designed (though indeed, modern slots developed by such companies, as Micro Gaming or Net Entertainment provide better 3D animation support), brightly colored and very attractive. The overall positive experience is underlined by quality soundtrack and interesting sound effects. The game’s visuals leave a positive impression, nonetheless do not represent the main attraction in the game. Its strongest selling point is the payout.

The return to player rating (hereinafter, RTP) comes to as much as 93.99%. Indeed, not the highest figure out there, still good enough, especially if taking into consideration the subsequent points. The game is labelled to have high volatility, fact which implies a possibility to win for everyone even on a low bet.

One more thing are the twists and changes during the game that are typical for highly volatile games. This adds on to the thrill of the entire farming process making it more vivid and filled with adrenaline. In terms of payouts – the game might produce a reward of up to 1 000x the stake on bet.

On top of that, the game is packed with many features, such as free spins and bonuses, remaining simple to play. With these in mind, it is not a wonder this title can still be found on best online casino sites powered by IGT even though the game was released in December, 2013 – almost a decade ago.

The game has 5 reels, with 4 rows and 50 pay lines, and it uses coins for in-game purposes. The coins’ and bet adjustment system is flexible and comfortable to offer players the possibility to create the perfect setup ideally matching their preferences and budget. The minimum bet size is 0.50 US dollars, while the maximum goes to 100 US dollars.

Given the potential 1 000x, hitting a win on max bet level would represent a payout of as much as 100 000 US dollars – generous enough to attract players with different tastes. A big downside of the game, yet typical for many other IGT releases, is the absence of mobile support.

Owners of mobile devices, such as iPhones, tablets, Android devices or iPads will not be able to enjoy the game being available only for PCs and respectively, for in-house playing.

Judging by multiple slot review posts, the game enjoys medium popularity on the modern slot games market. However, players who tend to experience the feel of a real land-based casino with a real one-armed bandit would enjoy it.

Its graphics and sound, as well as the concept, convey a nuance of nostalgia people enjoy. The game has obvious downsides, such as lack of mobile support, bonus game, additional features, etc., yet the list of its strong sides is also extensive – high payouts, generous RTP, agile gaming process, simplicity and lack of strategy to follow, etc.

It produces a positive impression, so chances are players who enjoy betting real money would continue having the possibility to enjoy it as it does not look like leaving.

Being a classical, “traditional” slot by nature, Grand Monarch uses a standard set of symbols, split into special and regular, the latest being divided into high- and low-paid values. The set of symbols includes: 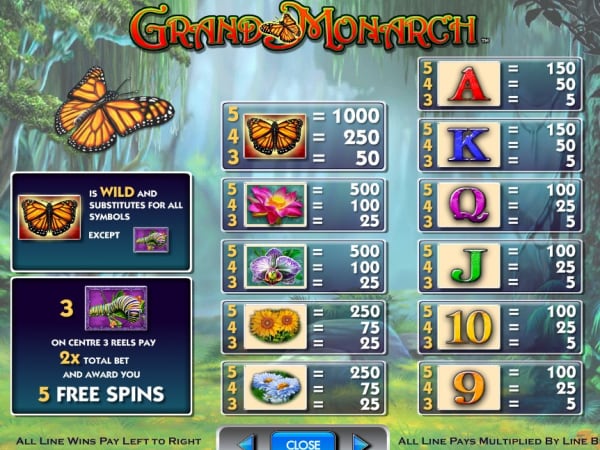 A detailed pay table could be found directly in the game.

The only incentivization feature available within Grand Monarch is the free spins package triggered when Scatters hit the reels. Whenever it happens, the player gets 5 free spins onto his/her account. The good point is that this feature can be continuously re-triggered generating up to 255 free spins in a row. It’s worth mentioning though players report that it is very difficult to attain.

Grand Monarch is not a game that leaves questions concerning how to play it and win. The game’s simplicity is nearing primitiveness. With no strategy required, with no need to keep anything in mind, any player can easily grasp it almost instantly. 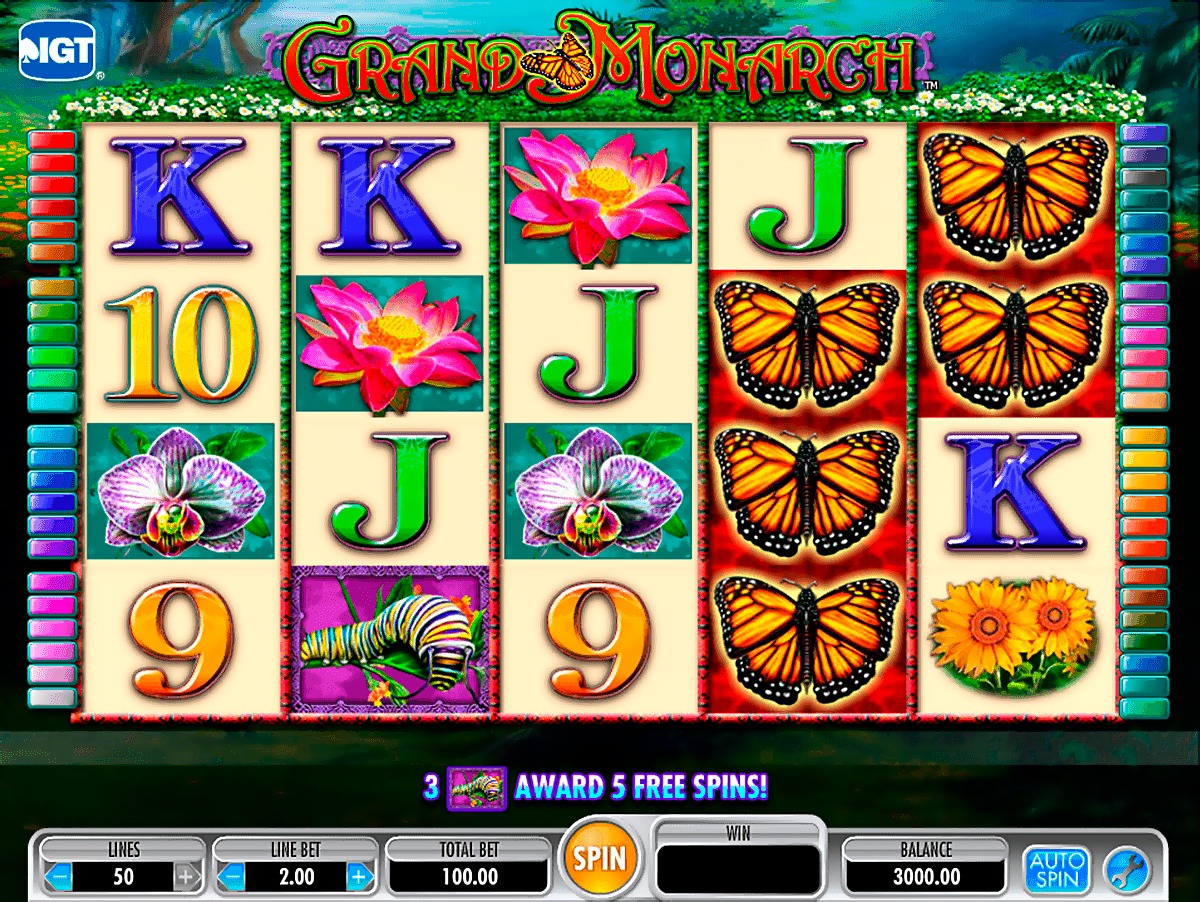 Even those with no prior experience with slots at all would be able to do it, however in such a case it is recommended to run a couple of free play rounds before actually betting money. Given the slot’s popularity and long presence on the market, there are numerous online casino slot sites offering the possibility to play it in demo mode, with no deposit and even registration required.

Also, such sites sometimes offer the possibility to win money without betting money – by including free spins for this game in the casino’s welcome or bonus offer. Such opportunities might arise while a player is looking for a resource to play for money.

After all details concerning the game are clear, it is high time to pick up an online casino to play Grand Monarch for money. Play option is also present on board to help players’ auto-spin for a pre-defined amount of times.

Grand Monarch is rightfully considered one of the most successful releases by IGT. Its overwhelming presence on multiple slot sites confirms this fact. Just as any other slot, it has its pluses and minuses, these briefly coming as follows: