Jeopardy! is a famous video slot released by IGT back in October, 2015. One of the cornerstones of the game’s popularity has been the choice of the theme – the respective show was a greatly popular show in the US since 1964, led by Alex Trebek who continues to run the show until today. The game itself has undergone a string of evolvements before players could enjoy this slot machine from their mobile devices.

Initially, it was a real one-armed bandit for land-based casinos. Later on, in 2015, the first online version of the game has seen lights, yet it was possible to play by PC and Mac uses only as the technology standing behind it was Flash – considered obsolete today.

The latest update of this neon sky blue slot comes in March, 2020. It finally made this slot available for mobile devices’ users equipped with Android or iOS-operated gadgets, such as mobile phones or tablets. This implementation has positively contributed upon the increase of the game’s popularity granting it a higher position in charts.

Today this slot can be found on any best online casino powered by IGT which is an indicator of the slot’s popularity. With 5 reels and 40 pay lines, it offers several interesting solutions. The game uses coins for in-game purposes, these being valued within the range of 1 to 100 US dollars. The minimum allowed bet is 60 US dollars, maximum – 3 000 US dollars.

The game is very flexible in terms of controls, however is definitely designed for big players who prefer betting real money in an attempt to hit the jackpot – Jeopardy! offers an impressive max possible payout of 25 000 000 – a huge amount rarely seen, though indeed difficult to attain.

This banded slot game is packed with various features this being the main selling point of it. The game has free spins, multipliers, several bonus features, such as Wild Rush or Spreading Wilds, bonus game, etc.

The return to player rating (hereinafter, RTP) is set at 93.6% – not the highest indexes ever, this fact being compensated by a very dynamic gameplay with multiple opportunities to win cash prizes.

The volatility is claimed to be medium, thus being a compromise for players with different variance preferences. During the refactoring stage agency developers have implemented industry’s best practices ensuring playing it is safe and sound even on a poor internet connection. Player’s money is always protected.

Judging about this slot machine by multiple slot review posts and feedback, it’s correct to say that Jeopardy! enjoys great popularity among players. This slot is not difficult to find in the portfolios of best online casinos powered by IGT.

Many of them even include this game into their bonus and welcome offers giving players a chance to win money without risking anything. Such a free play mode is preferable for players with limited or no prior experience with slot games.

Nonetheless, the game is very simple this being one more plus of it. Players like its bright, vivid neon color schemes, simplicity of strategy that does not require anything to remember. A great hit overall.

Jeopardy! Uses a standard set of symbols, these being split into regular and special symbols, while regular ones are split into low and high paid values’ categories. The high paid symbols include: 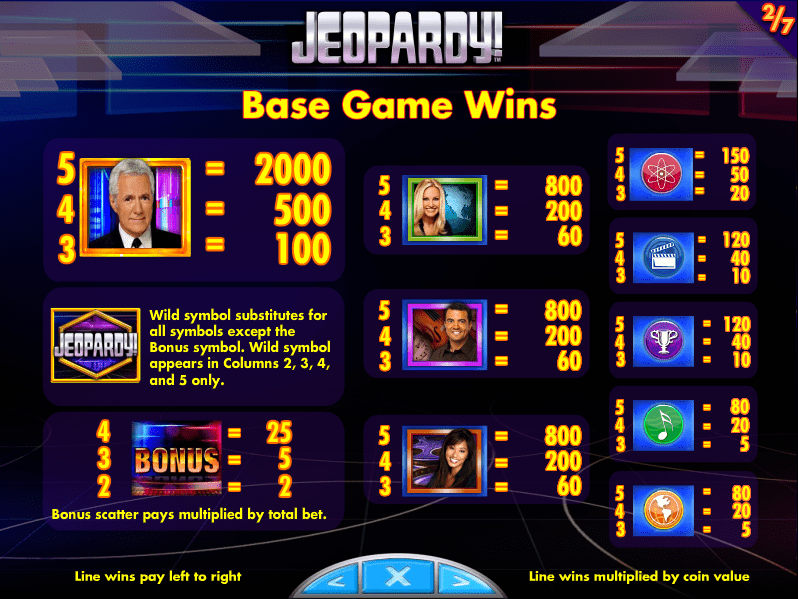 The low paid values are not represented by cards symbols as one might expect, however rather by a selection of symbols pertaining to TV show’s subject areas, including:

The list of special symbols used in the game contains:

The latest are mostly rewarded by multipliers, rather than by coins. An exhaustive pay table could be found directly in the game.

Unlike many other games released by IGT that are characterized by extreme simplicity in terms of players’ rewards, Jeopardy! is fairly rich in bonus features and options:

The game is considered to be very simple in terms of gameplay. It requires no strategy and emulates a classic one-armed bandit with no need to keep anything in mind or contemplate ferocious winning strategies. Given the long-lasting presence of the game on the market, finding a place where its rules are explained is easy. The easiest way is doing it directly on the site of the provider, with no deposit and even registration required. Also, some slot sites include Jeopardy! in their welcome or bonus offers, so there are chances to win money while playing in demo mode, with risks. 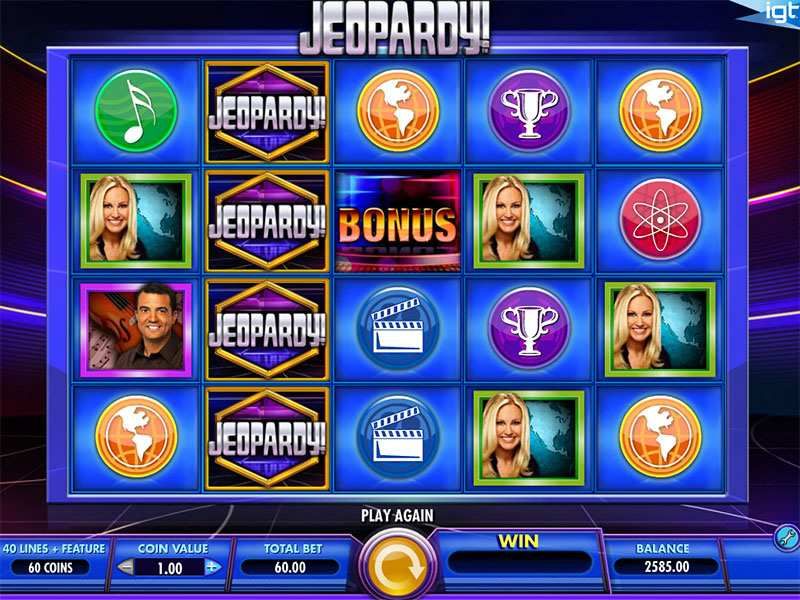 After swiping all of the how to play related questions it is high time choosing an online casino to play this game for real money. Before actually spinning the reels, players should make sure to adjust the bet and coin size. Auto play option is present and could be used to pre-determine the number of reels’ rotations.

Jeopardy! is righteously considered a very successful prodigy of IGT, today easily found on any of online casino sites powered by this famous provider.  It stands out from the crowd of other slot games due to amazingly high potential payouts, yet has more to offer, as well as more to improve. A generalization of player’s feedbacks reveals following strong and weak sides: