Miss Red slot machine was released in October, 2011 by International Game Technology WagerWorks – the industry’s forerunner with experience in the field dating back to the 1960s and the era of land-based casinos and one-armed bandits.

These days, a decade later, this slot game can easily be found in the gaming arsenal of best online casinos powered by this provider, which is clearly an indicator of its popularity. There has hardly been any other theme so well known to any person – the protagonist of slot’s idea is the Little Red Riding Hood, the character we all know since early childhood.

Designed in respective color, slot enjoys medium quality graphics and 3D animations – fact, typical for many other IGT products that positions itself as an agency specialized in classic, traditional slots emulating real one-armed bandits. Agency’s developers have shown a great sense of humor when designing the plot.

The story is a continuation of the good old classic tale, however Little Red Riding Hood is no longer a little girl. She plans to repeat the walk, find the wolf and show him who the boss is. Characters and symbols of the game respectively include the granny, the hunter and the big bad grey wolf.

The background of the game showcases a green, woodland theme, with grass and vines decorating the reels. The sound effects, same as video ones, are of mediocre quality, yet there is nothing annoying about them. On the contrary, the simplicity of the video and audio features helps get back into the atmosphere of a real casino and focus entirely on the game.

Miss Red uses 5 reels with 1024 ways to win, and uses coins for in-game operations, with min and max 1 coin per each line. The minimum coin size is 1 US dollar, the maximum – 50 US dollars. The game’s jackpot is as much as 150 US dollars, while the return to player (RTP) indexes goes up to as much as 96.16% – quite a decent figure, especially for IGT slots where it rarely goes beyond 94%.

The slot is labelled to have medium volatility, hence representing the golden line suiting both cohorts of variance enthusiasts. The base game usually offers small profits (yet the risks are not high as well), while the big ones are generated within the bonus rounds. The gaming process is very agile and entertaining.

Miss Red contemplates a plan to slain the wolf, the game provider did his best to ensure a thrilling process filled with expanding Wilds, both sides wins (meaning from left to right and right to left) which effectively doubles the chances to win, the End2End Symbols Expansion, free spins, bonus game rounds and many other interesting features.

The slot is mobile friendly and hence is well-suited to ensure a streamlined gaming experience. Windows, MacOS, Android, iOS and other mobile and desktop devices using these OS are granting full-fledged in-house and out-doors experience to these video slot players.

According to multiple slot review articles, a synergy of players’ feedback would showcase a medium to high popularity of the game despite its obvious downsides. Looks like the game remains competitive on the market filled with creative, beautifully animated video slots released out by other slot games, main reasons for that being the possibility to win real money.

Miss Red video slot is a classic type game with a fairly standard set of symbols, divided into special and regular ones, the latest being split into high and low paid values. 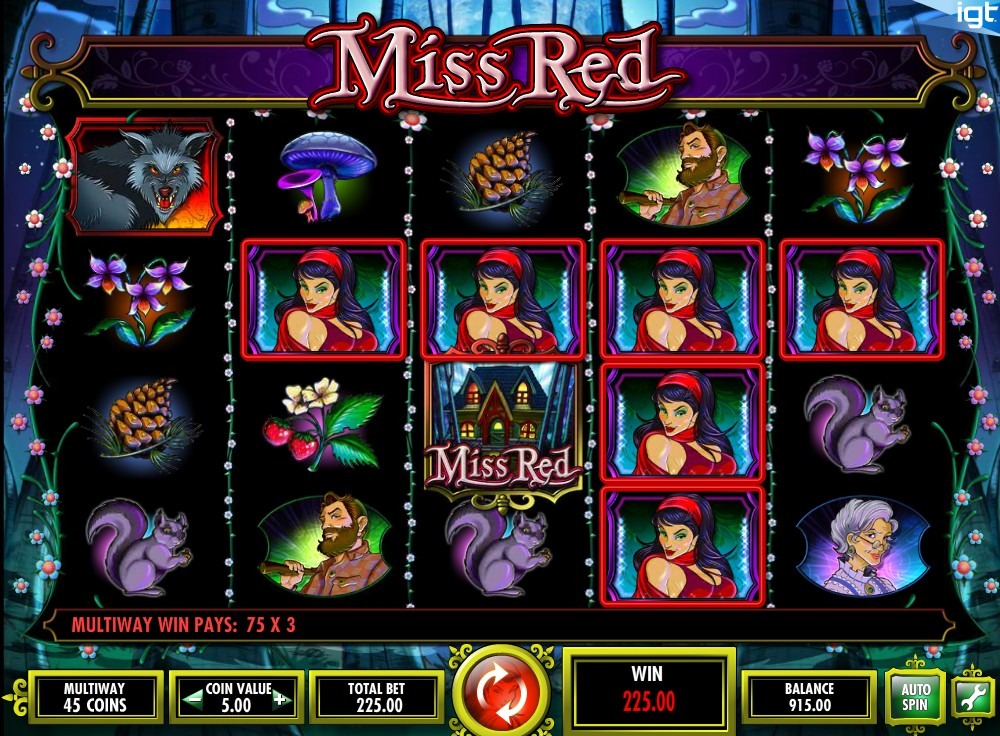 High paid symbols within the game are:

An exhaustive pay table, a very friendly one, is available directly in the game.

Miss Red is abundant in various bonus features and free spins ensuing an interesting and dynamic game play. There are several opportunities to generate free spins bonuses, as well as other bonuses, such as:

The Granny’s free spins bonus presented above briefly offers the possibility to choose one from 5 available baskets, each offering from 5 up to 15 free spins depending on the player’s luck. The End2End feature becomes particularly valuable during free spins rounds as this is the utmost efficient way to get the biggest reward.

Same way as in the case of many other games developed by them, IGT isn’t complicating the process. The game is incredibly simplistic, just as a real one-armed bandit would be. Playing and winning requires no strategy at all, while all of the how to play related questions that might appear in process are easy to answer. 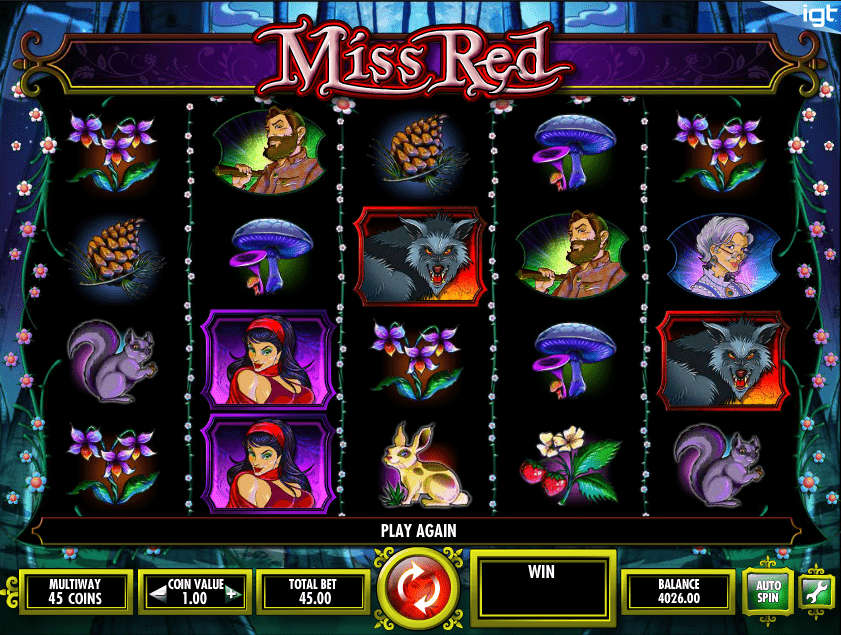 Despite the fact that even a novice could play it, it is highly advisable to test it in free play demo mode prior to betting one’s hard earned money. The game isn’t cheap in betting and is ideally suited for big players, so players should make sure they understand all details concerning the game play. Having in mind the overwhelming presence of this slot on numerous slot sites, finding such an opportunity is easy. Some online casino sites even offer the possibility to win money without betting and even with no deposit required, such opportunities would be ideal for a newcomer.

As soon as rules are clear, it is high time finding a casino to play this slot for real money and attempt getting the big jackpot. Player should adjust the coin and bet level and proceed spinning.

From any perspective, Miss Red is a slot that has more plusses than minuses, fact that guarantees it a stable presence in the list of IGT’s most popular releases as well as an overwhelming presence on slot sites powered by this provider. To reiterate in a nutshell the pros and cons mentioned above, the reader is invited to check the synergy below: