Nitro Circus is a famous video slot developed by Yggdrasil Gaming and is probably one of the most popular slot games of them. The game has a high rating among users for its dynamic scenario, rich bonus system, excellent 3D graphics and OSTs.

The game story relies upon an MTV show with the same name, popular between 2012 and 2014. The show featured a team of extreme sports enthusiasts led by T. Pastrana and continuously travelling around the world performing amazing stunts. Their quests were used to conceptualize the slot scenario filling it with crazy vehicles and stunts like flying through the air.

This is the first branded virtual slot machine from Yggdrasil Gaming. Many other branded slots from MicroGaming and Net Entertainment (e.g. Guns’n’Roses, South Park, etc.) experienced limited popularity; some of them are even pulled from the slots market today. Unlike these, Nitro Circus continues to enjoy an increasing popularity.

This slot features 25 pay lines with 4 rows and 5 reels. Coins are used as in-game currency; the player can set its value in the range between 0.004 Euro and 5 Euro. The bet size ranges between 0.10 US dollars and 125 US dollars – distinction big enough to meet the wants of both players who like to play big betting real money and those who prefer to enjoy the process without risking a lot. The game allows choosing between 3 different risk levels, the higher the risks are, the bigger is the win. A lucky player could get a jackpot as much as 50 000 coins.

Given that the return to player (hereinafter, RTP) rating of this slot game is unmatched 97%, the game appears very lucrative and promising. Same as other Yggdrasil slots, this one features great 3D graphics with quality audio support. The game requires little strategy to play, is easy to grasp. It is fully cross-platform adapted and can be used from any device running on Windows or Apple product, or any mobile device using Android, Windows or iOS.  Overall, this slot is an all-round thought and implemented product, this being the reason it can today be found in the gaming portfolio of best online casino sites.

As already mentioned above, the scenario of this slot is inspired by the Nitro Circus show. While in the game, players may pick up symbols representing the famous sportsmen of this team, namely: 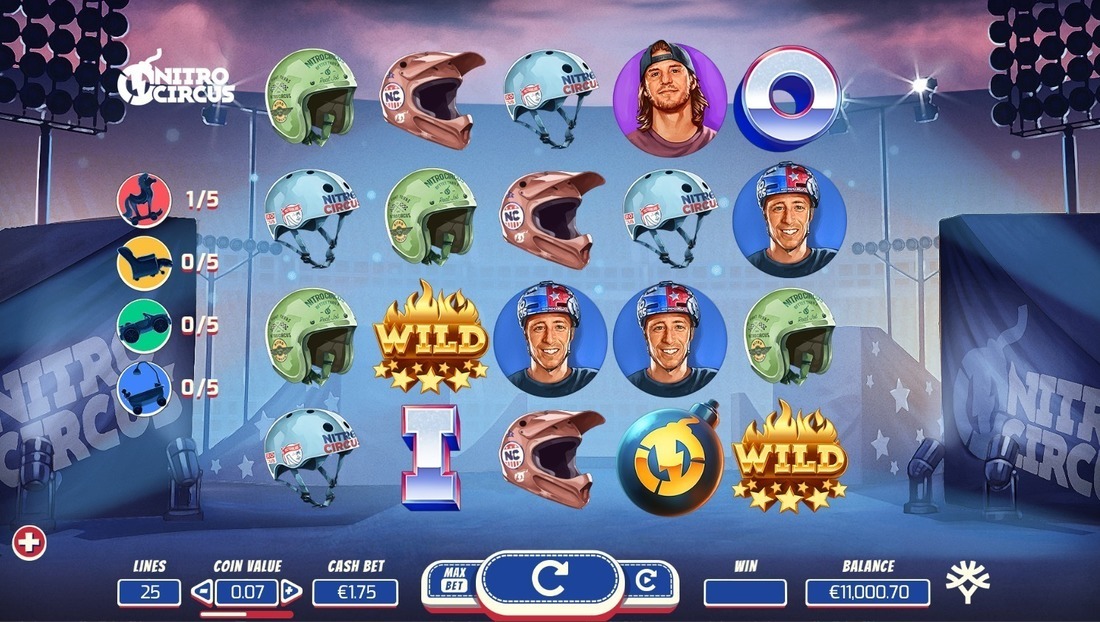 The symbols with a lower value are shown via colored helmets of different color. Other symbols used in the game, are:

When looking at the reels, the player will see in there 3 helmet–represented low value symbols (skate, motocross and air strike force helmets) and 4 high value symbols standing for the protagonists of the show. An interesting feature of the game is activated when the player either collect 5 different vehicles, or gets the Nitro full word while spinning. In the latest case the player gets options to choose one of 3 bikes. So, the Nitro Jump might bring the player from 5 to 625 coins based on chosen tricks. A feature cherished by players as it can generate considerable wins.

There is one more symbol standing aside from the regular ones – the Nitro Bomb symbol standing for the scatter in the game. This is a very interesting distinct feature of this game, in case the player manages to land 2 symbols, the Nitro Blast Mini Game round starts. By choosing 1 of offered 5 bombs, the player can enjoy following bonuses:

This plethora of entertaining symbols adds a lot to the game actions revealing a same tense atmosphere that the TV show used to have. Some slot review opinions even claimed that the scenario is somehow aggressive. However, looks like this only adds to its popularity.

Nitro Circus is a slot machine very rich in free spins/bonus round, various bonuses and special features. The Nitro Bomb symbols are the best means to land a/multiple free spin(s):

With reference to the Nitro Game Mini Blast free round mentioned above, this one will be triggered in case the player lands one additional bomb during the re-spin. Multipliers are increasing the player’s chances for a win. The Nitro symbol is yet another a bonus game opportunity to grant the player the chance to increase potential revenue. The Nitro Blast feature would fire when 2 bombs are landed during the free spins rounds. This feature is one more true generator of free spins, multipliers, whereas the landed wilds would substitute regular symbols to help get a winning combination.

The game is simple and usually leaves few questions about how to play it. The arsenal of in-game controls is fairly standard. Before actually spinning the reels, the player needs to be aware of the following things: 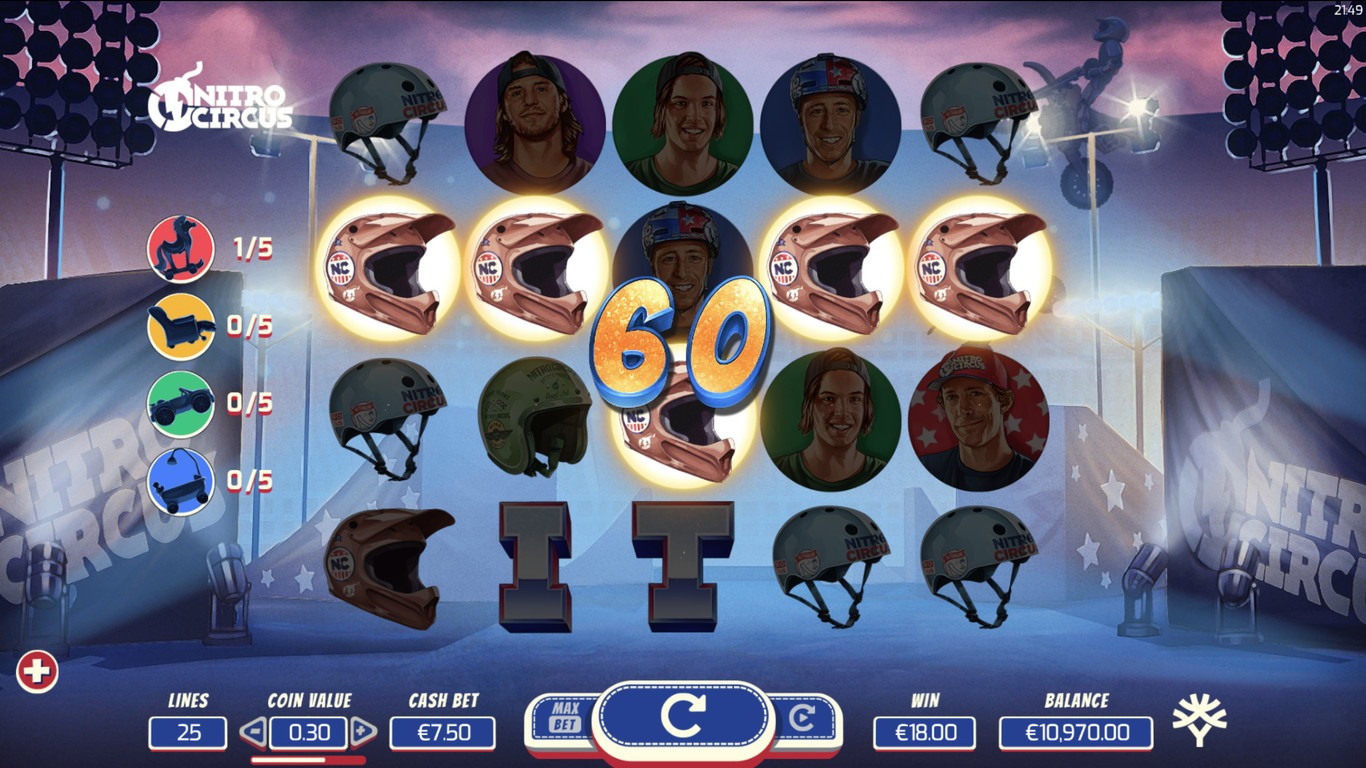 The easiest way to get acquainted with the game without risking any money is doing it demo mode directly on the official Yggdrasil site. There is a trailer available as well. Also, since the game can today be easily found on leading online casino sites, many of them are offering the free play option. On top of that, the comprehensive FAQ section can answer most of the player’s questions.

Today, the Nitro Circus slot can be found in the gaming portfolio of most notorious slot sites, some of them are even including this slot as a part of their no deposit bonus offer, which is a good indicator of this slot’s popularity. Players’ feedbacks are supporting this opinion. Overall, the reasons for the game’s success could be summed up as follows: