Queen of Gold is a magnificent Video Slot developed by Pragmatic Play in 2017. The title of the slot game refers to Cleopatra, the Queen of Egypt and at the same time the Queen of Gold. She wore luxurious clothes with golden jewelry. Because of her beauty, she was admired by many men.

As you already understood, the theme of the slot is dedicated to the Egyptian civilization. In addition to Cleopatra, depicted on the reels, there are 3 Egyptian deities – Anubis, Bastet & Horus. The whole image of the game is mesmerizing!

The visuals have a high quality. A sailing boat is visible in the background. Everything seems so alive! The colors blend flawlessly and the icons are animated very realistically. The Egyptian sound-theme complements the slot’s atmosphere, making it more mysterious.

The Return to Player (RTP) is 96.5%. The Volatility is medium. These indicators show that there are many small/medium winnings. However, as in all slot games, the big wins don’t happen very often. The cash prizes can be up to $10 000! The spin results are generated by a Random Number Generator (RNG), which is an algorithmic mechanism. Without it, the slot machine can’t operate.

Anyone can try the Queen of Gold with no deposits! In order to do it, find the demo version on many best online casinos. It is a 100% free play. It helps users to figure out the slot’s strategy & how to play it.

The slot features graceful icons that represent some valuable figures to the Egyptian culture. There are 7 regular symbols: 4 pay high & 3 pay low. In order to strike a Winning Combination, at least 3 matching symbols must align, according to one of the existing paylines. The symbols pay from the leftmost position. 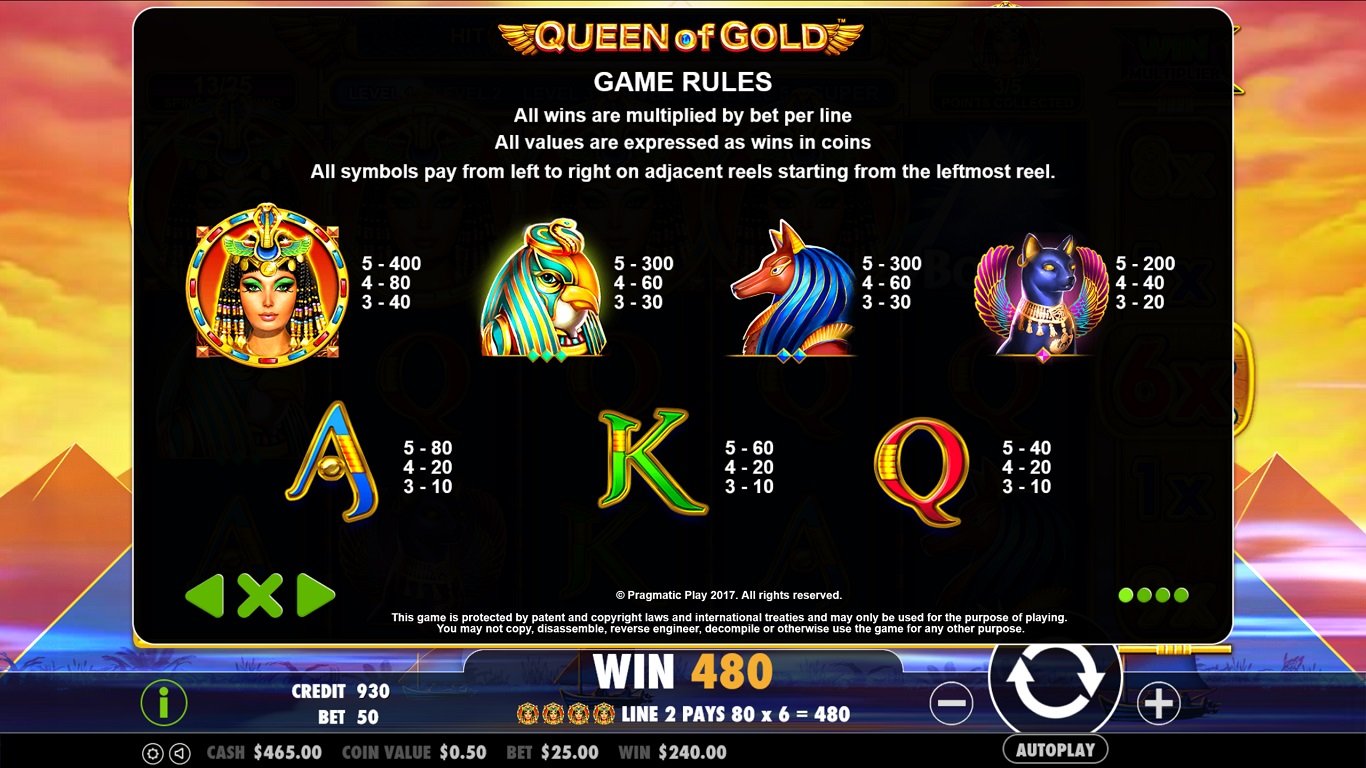 As well there are 3 special symbols, which trigger Free Spins & help increase the user’s winnings. The 1st special symbol is a Bonus Scatter Symbol, represented by a pyramid. The 2nd one is a regular Wild, illustrated under Tutankhamun’s sarcophagus. The 3rd symbol is the Joker Symbol, which advances the player to the next level of the game.

There are many slots with the same theme as Queen of Gold, but the Pragmatic Play developers did their best by coming up with some fresh bonus features.

The Free Spin mode is activated, when 3 Bonus Scatter symbols land on the reels. The Egyptian Pyramids can pop up only on the 1st, 3rd & 5th reels. The bonus feature consists of 10 Free Spins. During the Free Spin mode, more spins can be retriggered. There are no limits regarding the number of generated spins!

The regular Wild Symbol (Tutankhamun’s sarcophagus) covers all the symbols, except the Scatters. Therefore, if a Wild lands near 2 identical icons, a cash prize is obtained.

The 6th Reel Multiplier is a very fruitful feature. The Multiplier is located next to the 5th reel and contains multipliers & Joker symbols. The multiplier’s range is from x1 to x8 during the 1st level, but it can escalate up to x100 in the next levels. At the end of each spin, the value that falls on the 3rd row of the 6th reel will be the winning one. So, if a Winning Combination is formed, the prize will be multiplied with the reached value. But if a Joker prevails, the player will level up. The multipliers remain during the Free Spin mode.

Queen of Gold is a Progressive Game made up of 6 consecutive levels (5 levels + 1 SUPER LEVEL). The player can level up by collecting 5 points during 25 rounds or striking the Joker Symbol. The points are accumulated, when a Cleopatra Symbol hits the target, which is a golden circle. The circle’s position can be changed by the user. If the player doesn’t gather 5 points during the stipulated terms, he/she is returned to the beginning of the progress. During the Free Spin mode, the level, the remaining spins & the number of points are frozen.

There is nothing difficult in learning how to play Queen of Gold. The user does not need to spend time checking everything on his own. CasinoCredo has included all the necessary information in this slot review.

Firstly, it is recommended to read or at least look over the Game Rules. Also, the player can make a test run by spinning the reels a couple of times in the demo version of the game. It will help you get used to the game & to the Player Controls.

Secondly, the user should place a well-suited bet. Rash bets can leave the player without money. Remember, this is a game for fun, not for profit. The minimum bet is $0.25/spin. The maximum bet is $125/spin. A small tip – place something in-between.

Ultimately, the user can press the Spin button or set the Autoplay option. Just choose the number of plays (10, 20, 30, 50, 70, etc.) and fix, when the Autoplay must stop (on any win, if the feature is won, if a single win exceeds a certain amount, etc.). The Space & Enter buttons on a PC/laptop keyboard can also be used to spin or stop.

The mobile version is also available. Open an online casino site & play from any device, either smartphone or tablet, by accessing the slot via any web-browser, that supports HTML5 (Google Chrome, Safari, Mozilla Firefox, etc.).

Queen of Gold is another Egyptian-themed slot, which emerged on the market in 2017. Pragmatic Play made sure to create something unique and compelling. And we think they have succeeded! The visuals are top. The bonus features won’t leave anyone unhappy. And the rewards are hitting the spot. Find a slot site, deposit real money & enjoy!