Satoshi’s Secret is an innovative Video Slot launched by Endorphina in 2015. Even if it was released 5 years ago, CasinoCredo can say that it is one of the top progressive slots on the market.

Satoshi Nakamoto is a nickname for those who stand behind the development of the Bitcoin cryptocurrency protocol and are claimed to be the creators of the software (1 version) in which this brilliant protocol was implemented.

There were few attempts to uncover the real person who stands behind this achievement, but none of them has been successful. Therefore, the title of the slot is “Satoshi’s Secret” and why the game cover is represented by an unidentifiable personality.

The design of the slot reminds of the Matrix movie. The sounds that are triggered when the reels spin or when a combination is formed, perfectly match the theme. The gamblers will feel like some real hackers from Hollywood blockbusters.

The theoretical Return to Player (RTP) is 96%. The Volatility is low-medium. The slot has a lower risk, than other higher volatility slot games. Small and medium payouts are more common, although as an unexpected base bigger cash prizes might come along. The game outcomes are 100% random & impartial, because a certified Random Number Generator (RNG) is used.

See how it pays out with no deposits! Find the demo version of the game on many best online casinos. It may be the provider’s official slot site too. It is a free play. No registration needed. Just click the Spin button & start hacking!

Satoshi’s Secret has 10 regular symbols: 4 pay high, 3 pay medium & 3 pay low. All of the icons are drawn according to the theme. In order to strike a Winning Combination, at least 3 identical icons must line up in a row. 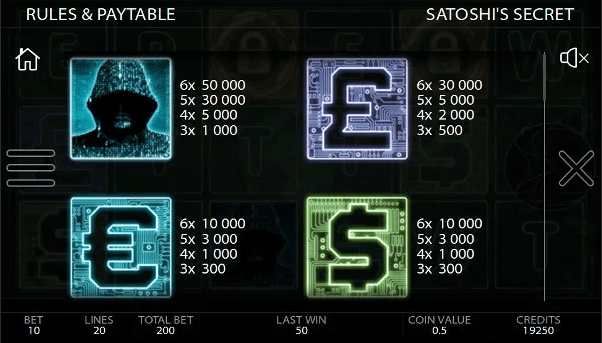 Satoshi’s Secret is a very engaging slot with some out-of-this-world features. There are no Free Spins, but don’t worry! The bonuses will keep on track anyone. The player will dive in an encoded world of 0s and 1s. Who doesn’t want to try to hack some banking accounts & steal their money? Certainly not real accounts, but real money can be won!

The Wild Symbol covers all the symbols, except the Satoshi & Padlock symbols. So, the Wilds increase the chances of gaining wins!

The Trading Bonus is activated, when at least 4 Yellow Padlocks land on the 2nd, 3rd, 4th and 5th reels. The player gets x30 of the total bets, which can be collected or used for trading. If the player goes for trading, he/she can choose a currency & guess the currency exchange rate progress – will it go Up or Down? Once the player has clicked the Up or Down arrow, he/she cannot change the chosen strategy. If the trader was right, a win is gained. If the trader was wrong, the loss equals to the sum multiplied by 3 total bets.

The Safe Profit is the insurance sum, which is paid out only in case the current profit reaches zero. The amount of Safe Profit is increasing every time, when at least 3 Padlocks land on the reels during the Trading Bonus. The conclusion is that you need to try more to get the higher Safe Profit!

The QWERTY Bonus is a striking feature, which is activated when the word “qwerty” is formed from the leftmost position. This word is actually the password for the secured banking system. The user is going to hack some of these accounts until the security alarm goes off. Each bank account has its security level, that is shown on the screen (Green, Yellow, Red). Higher the security level – higher the chances to get caught! The user can choose the order as he/she wants.

The Risk Game Feature gives players a chance to boost the prizes up to 10 times! The RTP is 84%. So, the player has to select a card from the 4 cards, which are faced down. If the player chooses a card that is higher than the dealer’s card, then the player doubles his/her wins.

In this part of the slot review, CasinoCredo has written some easy steps to follow. No need to be an experienced roller, in order to start playing. 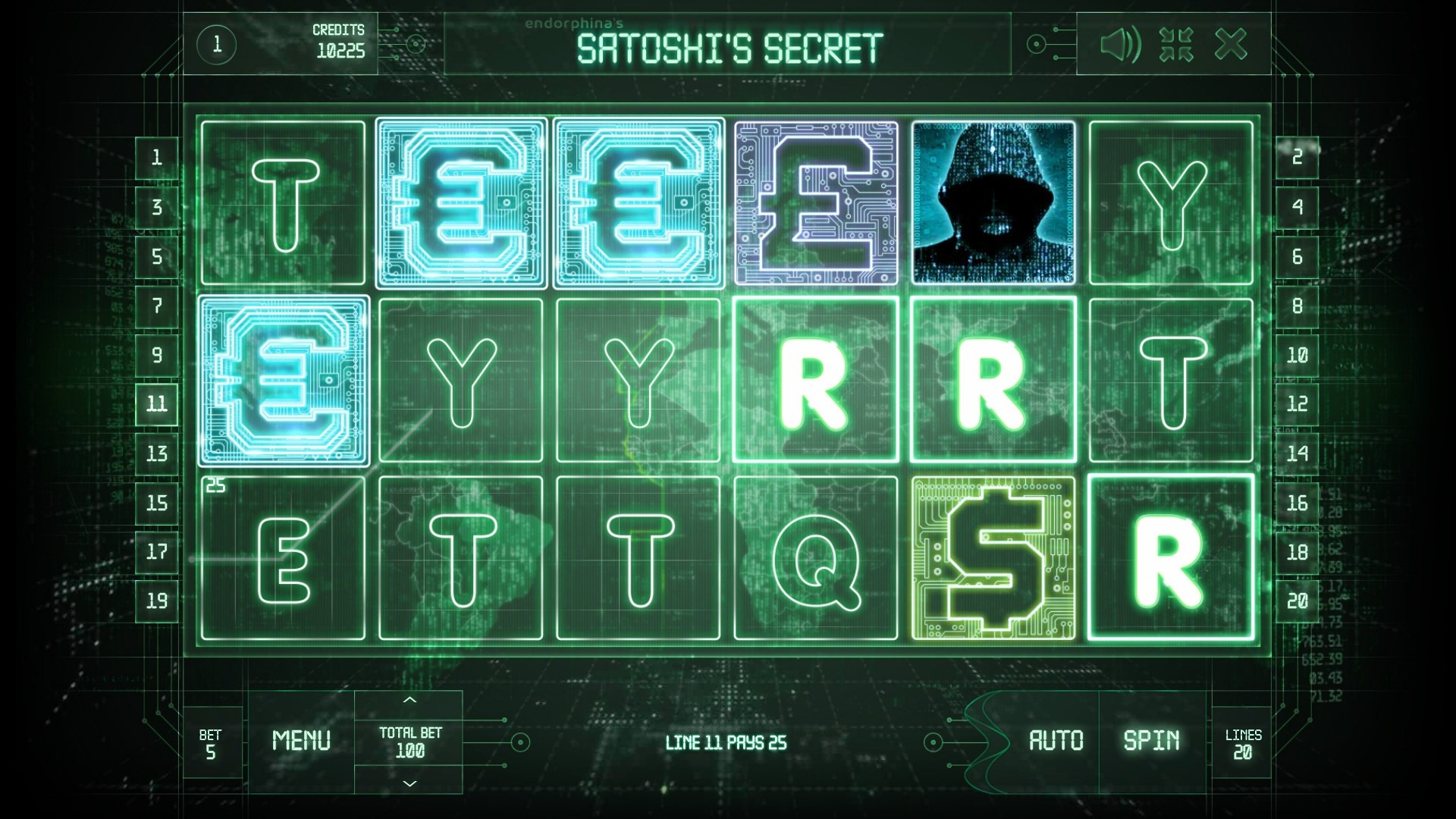 How to Play Steps:

It has a first-rate mobile version of the slot game, that can be accessed via mobile web-browsers, like Google Chrome, Safari, Mozilla Firefox, etc. No downloads.

Satoshi’s Secret is a unique Video Slot released by Endorphina in 2015. The players can experience a digital reality! Even if there are no Free Spins, that’s not a big deal, because the bonus games won’t take you away from the screen. Open the preferred online casino site & enjoy the world of hackers!