Sweet Bonanza is a sugar-coated Video Slot invented by Pragmatic Play. The release year is 2019. The slot developers have created a perfect world, which all those with a sweet tooth have dreamed of. Imagine, that there is a planet where everything is sweet, from mountains to clouds. In this slot game, players can experience this.

They can admire the scenery in the background, as ice cream and candy surrounds him/her, accompanied by a melody with a positive vibe. The grid is stuffed with fruits & sweets.

The theoretical Return to Player (RTP) is 96.48 – 96.51%. The indicator changes depending on the mode of the game (base game/bonus game). The Volatility is medium. This means, the slot pays out regularly – from low to high payment amounts. The maximum giveaway is 21,000 of the user’s bet! All the game outcomes are absolutely fair & legit. No slot machine can function without a certified Random Number Generator (RNG). It is a microprocessor, which gives out random numbers without stopping.

It has a demo version too. The version is suitable for newbies and slot amateurs. It is a 100% free play. No deposits required. It can be found on many best online casinos. After playing a little, the player will get used to the game’s mechanism.

The symbols of the Sweet Bonanza Slot correspond to the theme. There are 9 regular symbols: 4 types of candies & 5 types of fruits. The grid is embellished with colorful icons. As in all slot games, some symbols pay high & the other ones pay low. Obviously, the sweets represent some high-paying symbols, and fruits are some low-paying symbols. 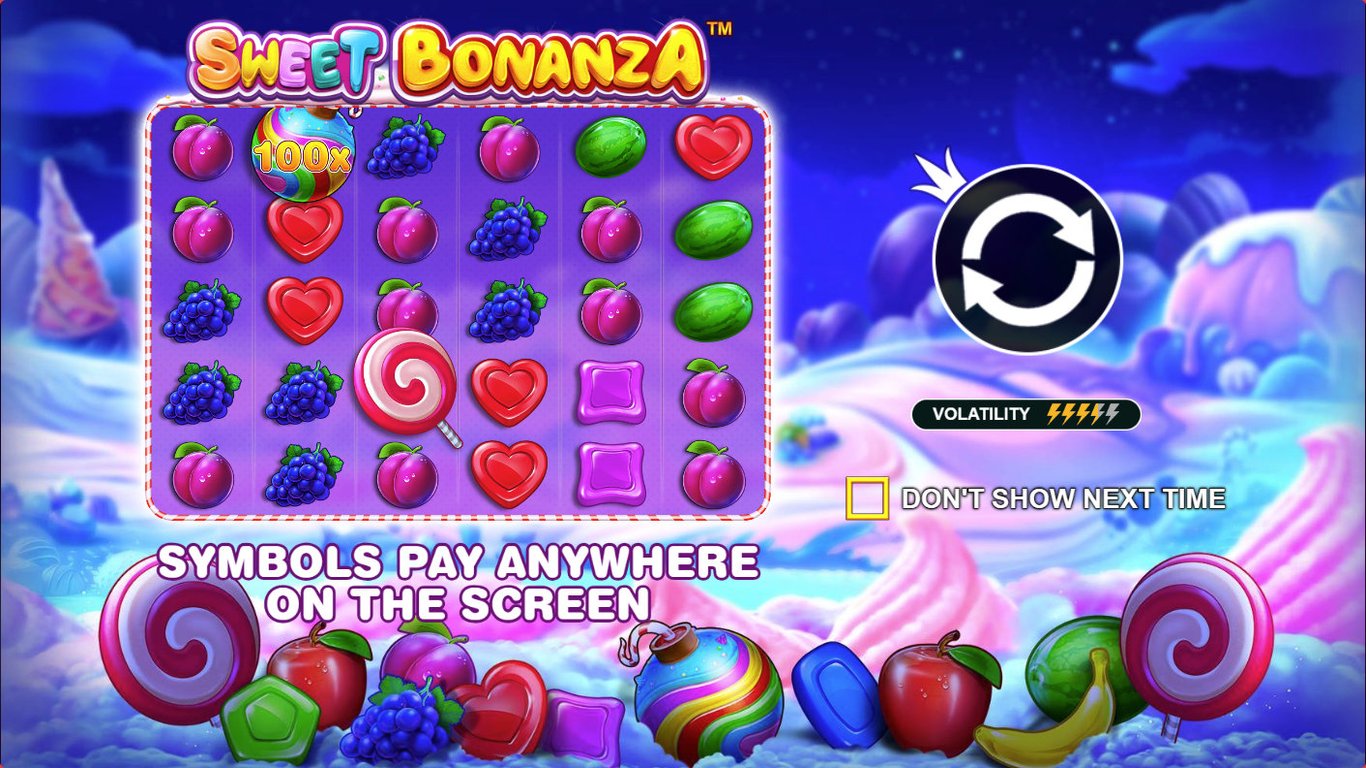 Also, there are 2 special symbols that trigger bonus features. The first one is a Bonus Scatter Symbol. It appears on the grid as a pink lollipop. The second one is a rainbow bomb, which stands for a Multiplier Symbol.

Let’s start with the Tumble feature, because this is the foundation of the whole slot. The Tumble feature, also called “avalanche reels”, is the way how the winnings are earned. When a combination is formed, the symbols disappear and new ones fall down. As a result, more combinations are formed or not. The round comes to an end, when no more combos are obtained.

The regular Wild Symbol is a pink lollipop that often pops up on any of the reels. The problem is, that the Wild pays out, when 4+ lollipops hit the reels randomly at the same time. In addition, players receive not only a cash prize, but also 10 Free Spins. If 3+ lollipops land on the grid during the Free Spins mode, 5 extra spins are added.

The Multiplier Symbol, which is a rainbow bomb, can explode only during the Free Spins mode. The bomb gets a random value – from x2 to x100. When a bomb drops, it lasts there till the end of the round. So, if more bombs drop, their values are added. After all, the round wins are multiplied by the ultimate value. A fascinating amount can be obtained!

There is nothing difficult to understand how to play Sweet Bonanza! In this part of the slot review, CasinoCredo slot site has written a step-by-step instruction that will be maximally useful to the readers. 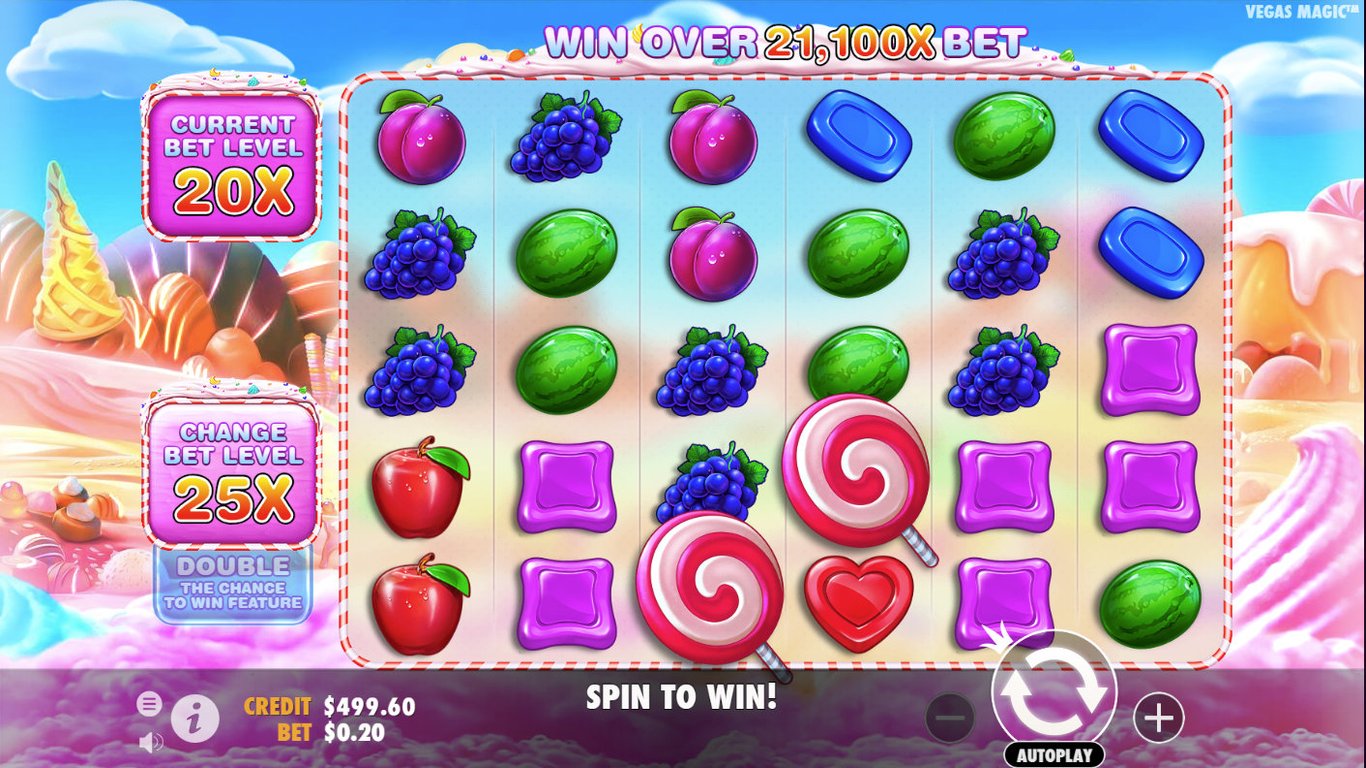 How to Play Steps:

Pragmatic Play has also launched the mobile version of the slot. Both desktop & mobile versions are tiptop. No bugs. The only thing that can affect the game is a bad Internet connection. Open an online casino site & play wherever you are, by accessing it via mobile’s web-browser (Google Chrome, Safari, Mozilla Firefox, etc.). It adapts to any screen size.

Sweet Bonanza is a sugary Video Slot released in 2019. A big thanks to the Pragmatic Play’s team for the Tumble feature. Who doesn’t like avalanche reels? And not just simple reels, but reels filled with sweets! It may seem too childish for someone, but this slot hides colossal wins – up to 21,000 of the user’s bet. Those, who played candy-themed games, like Candy Crush, will definitely like it. Wilds, Free Spins & Multipliers are waiting. Make a qualifying deposit in real money & enjoy!