Whenever speaking of Twin Spin slot games, the words “classic” and “traditional” come to mind as this is what the game effectively is – a video slot with regular symbols and features styled in a retro approach to create a respective gambling environment.

The slot machine has been conceptualized and developed by the famous Swedish-based gaming provider – Net Entertainment. A great product of its time, the slot has been released in 2013 for PC and in January, 2014 for mobile devices. The game is fully cross-platform adjusted, any player could enjoy both in-house and out-doors gaming experience without losing any of the game’s features.

This is a slot with 243 ways to win (famous NetEnt approach) and 5 reels. Slot’s volatility is labelled as medium to high that implies players will have to face some sudden twists while in the gaming process. Actually, the high volatility is something many players like as it adds to the adrenaline and raises the spirits.

The coins’ values range from 0.01 to 0.05 US dollars each, the minimum bet is 0.25, while max bet – 125 US dollars. Most NetEnt slots prefer to stay at a lower bet and win rate, however Twin Spins stands out of the crowd with its maximum jackpot of 135 000 US dollars. The game is very simplistic, not to say primitive, with no free spins and multipliers available, at least in the broader known meaning of these. Wilds and a special feature – Joint Reels Feature – tend to compensate for the absence of the above heavily offering enough entertainment and opportunities to win. With a pretty high hit rate of 27.08%, the slot features an RTP of 96.6% and max jackpot per spin of 1 000 coins thus becoming an attractive destination for players looking for a big win.

Today few online casino sites do not have this classical retro slot in their arsenal of games. Its simplicity has made its way to a very high popularity standing among players. NetEnt has created a spectacular showroom of 70s Las Vegas casino with bright colors enjoyed by various categories of players regardless of their budget. In many aspects, it looks similar in terms of plot with Thunderstruck slot game, or Voila!. Its basicness and intuitiveness of its design swipes away questions like how to play it, making it an excellent first choice for players with no prior experience with slot games. It can easily be played for real money and in a free play mode on multiple sites which is a good indicator of its popularity.

In all terms, Twin Spin is a traditional slot with a limited set of regular features and one special feature on top. Game is well known for following aspects and has following traits: 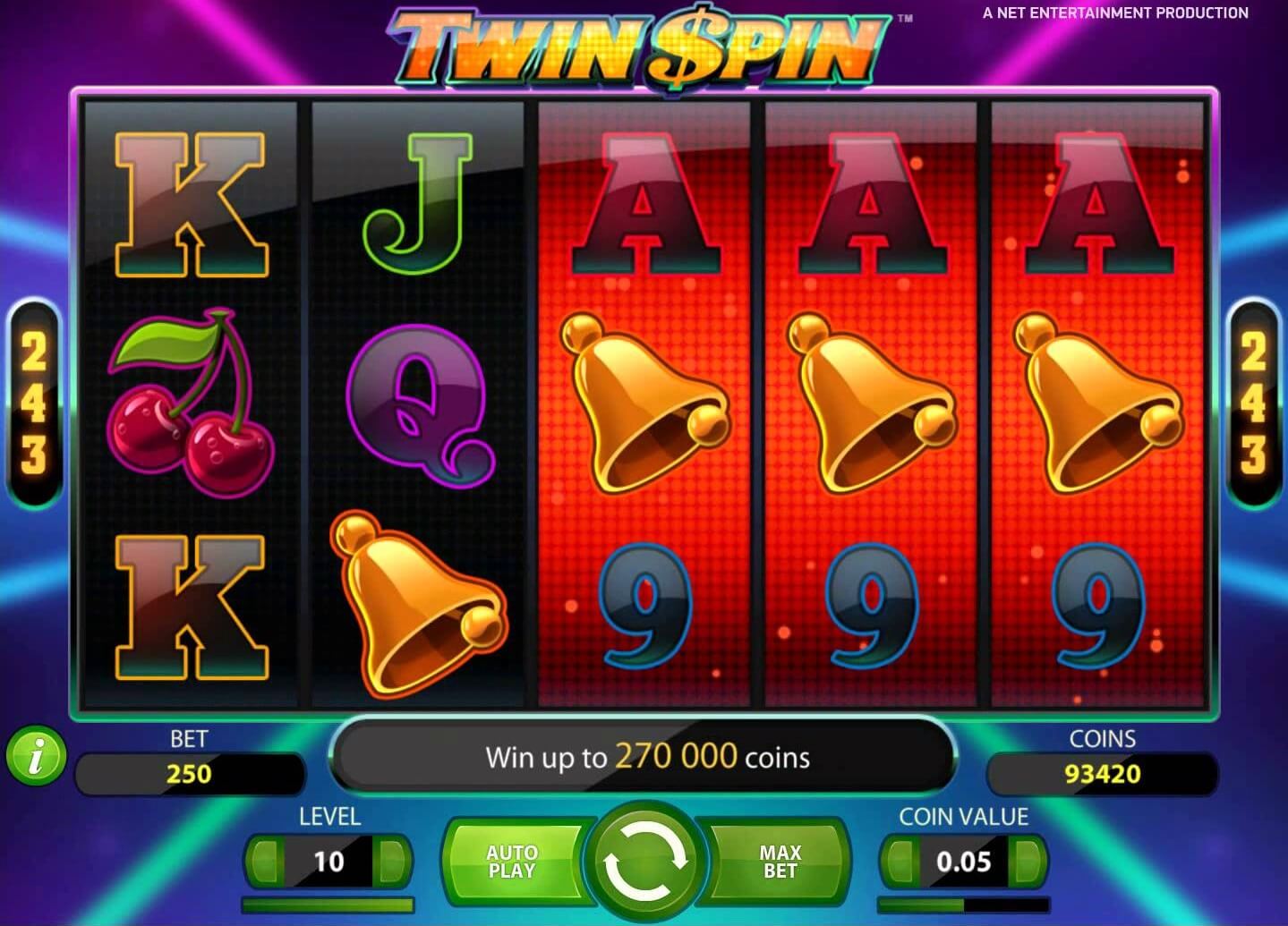 Since its release in 2013 there has been almost a decade – more than enough to collect diligent player reviews and feedback. Looks like the scarceness of symbols in Twin Spin does not affect players’ interest in the game. People who prefer betting real money and who are ambitious to get a big win prefer excitement and adrenaline over a complicated gaming process. This video slot requires no strategy to play, hence allows entirely focusing on the process.

The game’s name originates from the Twin Reel – a reel system that doubles the symbols across the reels by replicating them. The double reels are being expanded across other reels offering up to 3 rows with identical symbols – overall, this can result in an impressive win amount. In a nutshell:

Without any doubts, Twin Spin is one of the simplest games to play out there. With no scatters, no free spins and other bonuses than the Twin Reels and Wilds could offer, this game appears to be very simple in starting. Even a novice player would easily grasp how to play it by using the assistance of the in-game FAQ section. For sure, it’s unusual gaming format might require a couple of minutes to grasp the idea, but not more. Before throwing in money, it is advisable to test the understanding of the game idea in a risk free manner.  Playing Twin Spin with no deposit, no risk and even no registration is possible directly on the official site of NetEnt. Players would also find there a detailed description of the game and several trailers to get acquainted with it fully. On top of that, there are many slot sites including this slot as a part of their welcome bonus offer, such as Ninja Casino. There any player could sharpen his/her skills in a risk free demo mode, as well. 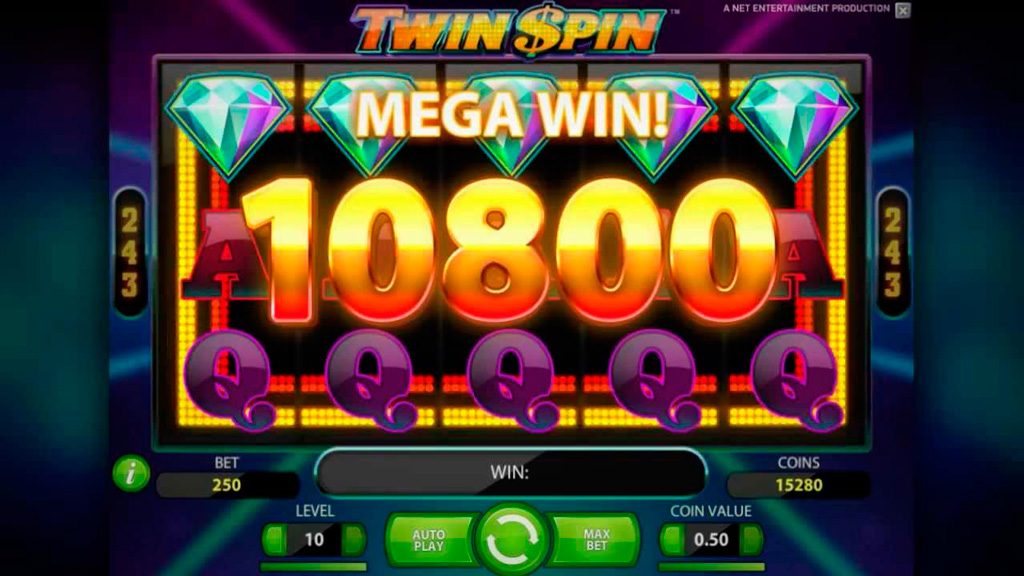 As soon as the player is ready to start betting money, the player should adjust the size of the coin and of the bet, and proceed spinning the reels.  Auto play options allows setting as much as 1 000 spins, while max bet would save player’s time adjusting the coin and bet value at maximum possible.

For many players and online casino fans it is still a wonder how Twin Spin managed to reach such an outstanding popularity. This Net Entertainment prodigy looks somehow special in the array of games developed by this brilliant manufacturer. The Twin Spin video slot showcases a non-full regular set of symbols with missing scatter and free spins, which makes it even easier to play. At the same time, with a high hit rate of 27.08% (meaning 1 of 3.4 spins has the chance to win), the slot features an RTP of 96.6% offering max prize of 135 000 US dollars – quite an impressive amount for a traditional NetEnt slot.

Today a player can stay assured that any casino fighting for the status of the best online casino surely has this game in its gaming portfolio. The video slot has acquired its keen army of followers due to its quality 3D animations and good sound, but mainly to the straightforwardness of the gaming process. Multiple slot review posts available on the web affirm the idea that this slot, with all its primitiveness and an old-fashioned retro gaming process, will still stay long on the market.