White Orchid video slot is a release by IGT WagerWorks that first saw the light in July, 2010. With over a decade of continuous presence on the online casino sites’ market, the slot steadily maintains a moderate level of popularity and interest.

Given the competition in this field and the amazingly beautiful slots provided by industry monsters, such as MicroGaming or Net Entertainment, such a strong status quo is clearly an indicator of something special. As it’s known, IGT is probably the oldest company operating within this industry. Having started back in the 1960s’ in land-based and one-armed bandits’ business, it gradually expanded upon the online casino market.

This team of developers is famous for replicating classic slots revealing the true atmosphere of a real casino and slot machine. They have a demonstrated ability to create vivid, captivating scenarios and find interesting new solutions for good old known game aspects. White Orchid is not an exception from the rule.

The game is designed to host two different games – regular one, with 5 reels and 40 pay lines, and the bonus game rounds triggered on several different occasions with 1 024 Way to Win system. Effectively, players would still see the same reels’ grid on the screen, however winning combinations will be counted differently.

This system envisages double-sided counting of matching symbols, meaning from left to right and from right to left. This heavily increases the chances of getting an impressive reward.

The theme of this slot game helps players’ transgress into the world of Amazon jungles, the native land of orchids. The stunning beauty of the region, the wilderness of main heroes of the game, these being dressed in primitive outfits firmly underlines the game title.

The graphics are hard to be boasted as being great, but it is OK even now, a decade later after the release. According to some slot review posts and feedback, many players complain about these two alleged downsides. Yet the interesting part is that they continue playing it, this having several reasons behind it.

The game uses coins for all in-game purposes these being valued from 0.40 to 1 600 US dollars, with 1 coin per line allowed. The betting options vary depending on the game stage – for example, the betting margins for the 1 204 Ways to Win mode is from 0.80 to 1 600 US dollars. The system is incredibly flexible and allows any player to find the ideal balance between risks and adrenaline, and the budget. Same as bet levels, the game mechanics influences the volatility.

In the base 40 pay lines mode players would see medium volatility, however the advanced one would move the accents onto the territory of low variance ensuring a long-lasting quest towards the maximum possible jackpot – 5 000x per spin. On a max bet level the maximum possible cash out is 8 000 000 US dollars! An incredible amount even for IGT slots, famous for their high rewards.

With a return to player (RTP) rating of 95.03%, which is a mediocre rating compared to even over slots by this provider, however this is a provision related to the emulation of real one-armed bandits that used to feature lower RTPs, this slot becomes an attractive destination for countless players. This is one of the reasons that today it can easily be found in the gaming portfolio of best online casino sites powered by this provider.

At this point, it is also worth mentioning that the game is packed with several bonus features that definitely added on to the game’s popularity. Firstly, it’s the 1 024 Ways to Win, a feature later copied and known as Avalanche Reels or Cascade Reels – it heavily increases the chances to win. Secondly, the game is packed with free spins offered on several occasions.

Bonus game rounds, multipliers, it has it all. One more important thing to mention is that unlike some slot games created by this provider, this slot has full-fledged mobile support, does not require downloading and is perfectly suited to deliver high-degree in-house and out-doors experience.

Android or iOS, Windows or MacOS or any other operating system in use for desktop or mobile devices, the player won’t have to sacrifice anything even if playing on very small screens.

Symbols used within the slot game are split into special and regular symbols, with the latest being divided into high and low paid values. From this perspective, White Orchid does not deviate from the traditional slot’s concept in any way, the highest paid symbols thereby including: 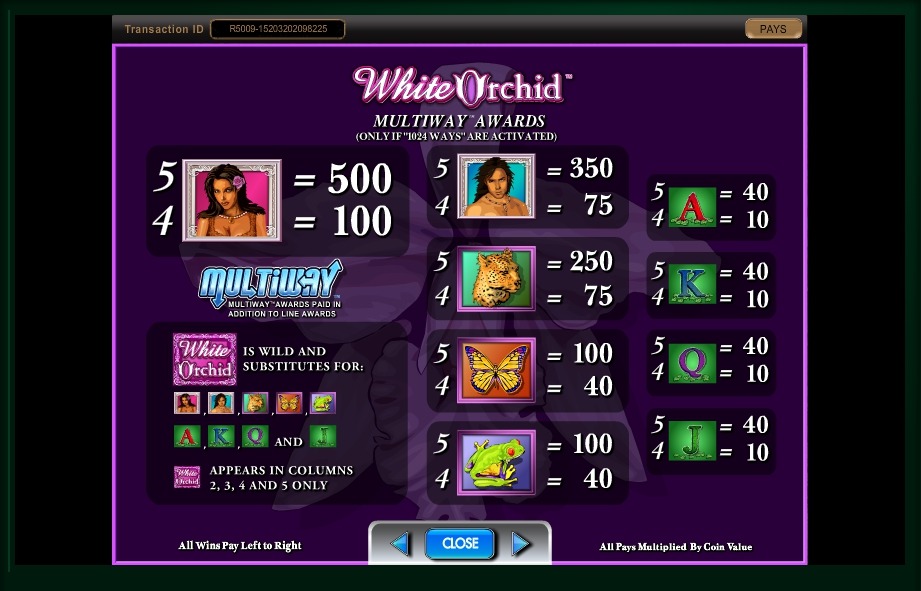 There also are special symbols in the game:

A comprehensive friendly pay table with detailed description could be found directly in the game.

This video slot game is fairly straightforward, does not contain tons of features, however these are well balanced to deliver a continuously thrilling experience and a sensation that the jackpot is near. The 1 024 Ways to Win is probably the main special feature within the game, and the greatest profit generator. The game uses Wilds that can act as Stacked Wilds, and uses scatters that trigger the only bonus feature on the 3rd reel, these being rewarded as follows:

If player lands bonus symbols during the free spins, these are added on top with the possibility to collect the maximum of 130 free spins.

White Orchid is hard to call a difficult slot. It does not contain tons of features, while the ones present do not require too much attention from the player who may focus on the game rather than counting Wilds. With this in mind, the most efficient strategy to play this game would be:

Given the high cash reward potential of this game and the high bet levels, it is wise to test the game in free play demo mode on slot sites offering the possibility to play it in a risk-free fashion, with no deposit and even registration required. The overwhelming presence of the game on many online platforms would make it easy, while the easiest way would be doing it on the IGT website.

After all of the how to play related questions are clarified it is high time to:

Overall, the game is considered to be a simple one, easy to catch up and start betting real money in order to have the chance of getting the big win.

White Orchid is a very successful prodigy of IGT WagerWorks that will stay in the market for long, as the string its pros heavily overcomes the list of cons. Players continue choosing it despite other slots being visually more attractive and featuring more sophisticated scenarios.